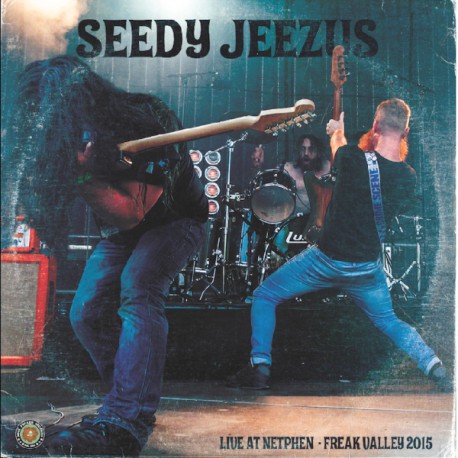 Hidden in a forested valley in Netphen, Germany, The Freak Valley Festival is a well-loved event that celebrates at its heart: good bands, good people and definitely good times!

In 2015, sharing the bill with the likes of Blues Pills, Orchid, Electric Moon and Earthless, Seedy Jeezus took to the stage on a gloriously sunny afternoon in June with a large curious crowd, interested to see the first Australian band to fly the flag at Freak Valley. It was Seedy’s second show on their first tour of Europe.

Seedy Jeezus were supporting their acclaimed self-titled debut album and they showed everyone that they can pull off their own form of crushing heavy psych rock live, just as well as they can in the studio.

Their Freak Valley Festival performance was recorded and is now presented on vinyl as Seedy Jeezus: Live at Netphen, Freak Valley 2015. The full 40 minute set captures a mixture of their most popular tracks from their debut self-titled album plus the captivating instrumental opus Three Million Light Years. The tracks are a manifestation of the studio versions but have been stretched, jammed and reinterpreted to highlight the frenetic pace of a Seedy Jeezus  live set containing mammoth riffage, psych freak outs and sci-fi soundscapes.

Seedy Jeezus during their 40 min set won the crowd over and made alot of new friends and fans who have continued to support and follow the bands progress with each release. Part  of the bands performance was also shown on the local German news that night.

Seedy Jeezus, Live at Netphen, Freak Valley was mixed and mastered by Jason Fuller at Goatsound in Melbourne, Australia from multitrack recordings, this album sounds as rocking and brutal as can be expected of any live Seedy set.

Track List:
Chasing the Dragon's Tail
Wormhole
Three Million Light Years
Pick Up
How Ya Doin
Sun in my Car

Seedy Jeezus Live at Freak Valley will be limited to only 300 copies worldwide on vinyl with no intention of being repressed once it is sold out.