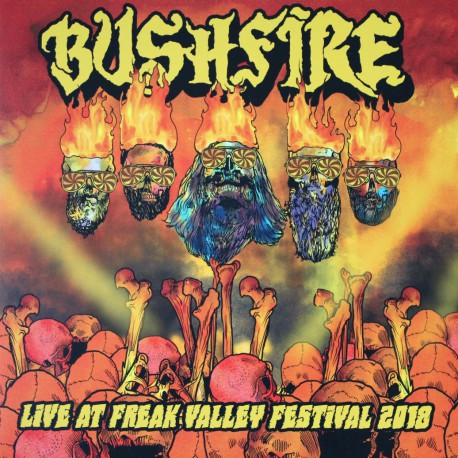 Bushfire, founded in 2004 in Darmstadt, are a five-bearded international consortium inhabiting the Heavy- Blues-Rock area. Counting up to their eight release (including demos and Split-Singles) they recorded their first Live LP at the meanwhile legendary Freak Valley Festival in Netphen-Deutz in 2018.
Bushfire was part of the very first FV lineup as early as 2012 and continues to be a beloved and familiar part of the festival, be it as acoustic set, special guest, presenting a live fire show, working as volunteers or just experiencing the festival with the myriads of hard rocking freaks.

The LP (mixed by Albe, the final mix and mastering by Tony Reed, artwork by David Paul Seymour) includes a seven-part journey through the band's creative DIY work.
The grand finale, however, is a song closely connected to the gentle giant Bill's (born in NYC) personal history. One of the first tunes he heard when he stepped foot on German soil was the Hit Song bei Ton Steine Scherben: "Macht kaputt was euch kaputt macht". This German Evergreen stuck with him, influenced and inspired him in the early stages of Bushfire.

Right on time, 8:20 p.m. "When darkness comes" pulsed from the stage unto the AWo area followed by "Die trying", a marching Heavy - Rocker, the lyrics written by Bill about his mother.
The 2010 Album's title song "Black Ash Sunday" came third, a rough Heavy Blues Doom machine that is a fixed part of Bushfire live sets. The A Side finishes with "Fallen from Grace", a fast paced finale that sets the stage for the B Side starter.
"Failure is not an option" presents itself as raw, pure Heavy Rock and glides into the Doom blues of "Shelter" and "Useless In 50 Many Ways", rough and bumpy where it needs to be and including a heartfelt thank you to the audience, giving their sweat, beer and flying hair to support the band in front of the stage.